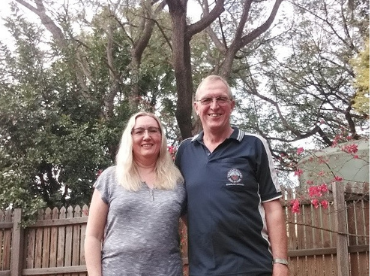 Lake Moogerah Caravan Park, located on the picturesque shores of Lake Moogerah, is surrounded by the Scenic Rim’s spectacular scenery. Imagine waking up to wide open spaces, an abundance of wildlife and a panaromic view of the surrounding mountains.

Katrina and Leif Pedersen are two very lucky people who enjoy this view every morning as they have recently been appointed as the new managers of the Lake Moogerah Caravan Park. Katrina and Leif have just completed their onboarding and inductions, but they are not new to leisure management, having concluded stints at many venues including Coolah Caravan Park, NRMA St Helens, Big 4 Deniliquin, Mclarenvale Caravan Park, Birdsville and Mystery Bay.

Both Katrina and Leif are avid campers, as their big rig on site demonstrates. They enjoy perceiving a venue from a guest’s perspective and looking for ways to exceed expectations, but had never expected one of their guests to be of the four-legged variety.

Lake Moogerah is a National Park and as such, does not allow pets on site. Much to Leif’s surprise, he recently found a stray cattle dog roaming the Park, obviously quite enjoying the weather and scenery. 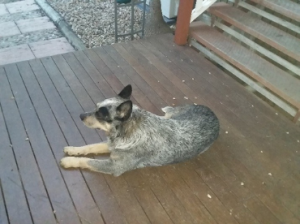 “When it got dark and no owner appeared to claim him, we decided to keep him for the night,” said Katrina.

“He was so friendly and well behaved, we thought surely he must have a home nearby,” Leif added.

The next morning, Katrina and Leif drove their temporary guest to the Vet where his microchip identified him as ‘Bruce’, then took him home to be reunited with his family.

Scenic Rim Regional Council Mayor Greg Christensen said the Council was delighted to have Katrina and Leif on board to manage one of the region’s most loved camping grounds. Scenic Rim Regional Council looks forward to a continued partnership with BelgraviaPRO in delivering substantial upgrades to the Park including new amenity blocks, camping kitchen as well as upgrades to the footpaths and road infrastructure.

“These changes are set to make a big difference to the campers’ enjoyment during their stay, and importantly the works will help create jobs for local people,” Cr Christensen said.

With such beautiful surroundings and the upcoming upgrades, it would come as no surprise if Bruce decided to pay another visit to Leif and Katrina in the coming months.