The Eurobodalla Shire has been at the centre of the fire grounds that affected the NSW south coast over the past couple of months — culminating in the dreadful events of New Year’s Eve when several hundred homes and numerous businesses were destroyed.

As ash and smoke fill the air, there is a palpable sense of loss and emptiness in the shire. BelgraviaPRO’s Operations Manager, Richard Lykke says “what was once a collection of tranquil seaside villages, full of happy families enjoying their summer breaks, looks more like a war zone.”

BelgraviaPRO staff have played an essential role in response to this crisis. Staff were well-prepared, having reviewed their EMPs and undertaken fire evacuation drills in the lead up to the peak season.

Lykke said, “they discharged all of their duties with distinction and represented BelgraviaPRO admirably.”

With only a narrow window of opportunity, staff members that were supervising the evacuation did so at the risk of being unable to get themselves through fire-affected roads to the north and south in time to defend their own homes and families.

At Dalmeny Campground, Managers Col Towers and Sue Parrey evacuated over one hundred sites. However, they elected to remain on-site themselves to look after several guests who were unable to leave due to traffic congestion, limited fuel supplies and complete collapse of telephone, Internet and Eftpos facilities.

Col and Sue also provided assistance and a safe haven for dozens of Dalmeny residents who, having been advised to leave their homes but unable to reach the official evacuation centre, sought refuge from the fire threat within the campgrounds.

They provided comfort, security and support in what was a very traumatic period. Col and Sue kept the amenities blocks open and operating, provided numerous snacks and warm cups of tea despite there being no power for several days. All the while, they always remained available for a word of encouragement and good cheer. 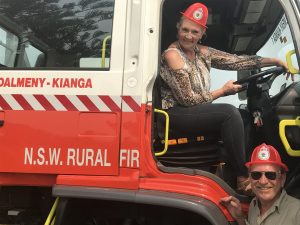 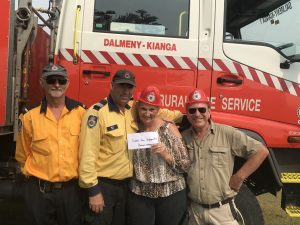 Pictured above are Col and Sue presenting a donation of $500 to the Dalmeny RFS Captain Greg Hill and one of his team members, to thank them for their support, guidance and advice during these events.

We’re happy to announce that the campgrounds have re-opened for business, all the major highways are now open and safe.

Slowly but surely, things are going back to normal for The Eurobodalla Shire as the community comes together when we need it most.